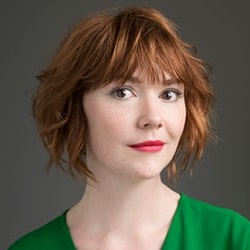 In the last few years Elf has gained a reputation as one of the most innovative performers on the UK comedy circuit, be it dressing as a parrot, impersonating a horse or guiding the audience through a ballet in pidgin French. Her dynamic high spectacle comedy shows have each performed to sold out audiences throughout the UK and beyond.

Kids might have seen her on CBBC’s panel show The Dog Ate My Homework, or just straight up mucking about at one of our gigs.