We are, as our name very strongly suggests, a Comedy Club 4 Kids. We run shows, for those who want to see comedy aimed at a family audience, and workshops, for those kids who want to try it themselves. We have been doing it since 2005, so well over a decade. We’re really rather good at it.

Our club has on stand-up comics and sketch acts, performing for kids of 6+ at a time of day they can see it, in venues they can go to, and telling jokes without any rude words so they can watch it! Many of the guest performers also appear on our Radio Nonsense podcast, joining host Tiernan Douieb in answering kids’ questions.

Our workshops teach kids how to write and perform comedy, finding the funny in life and their own experiences, and turning this into confidently-delivered stand-up and sketches. We have run them in theatres, schools, festivals, conference centres and even a LEGO Laundrette! 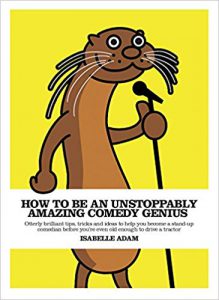 Alongside these classes, we have written an otterly incredible 50-page guide for would-be comedians, which you can buy from Amazon, Etsy and directly from us, either online or at one of our shows. Titled ‘How To Be An Unstoppably Amazing Comedy Genius’, this booklet is packed full of tips for budding stand-ups, to take them from coming up with ideas for material to actually performing it.

One copy is £7 for UK customers, including postage & packing; if you’re anywhere else they’re £10. The books are brill. We are very biased. And very proud of this. You can get it here.

THE HISTORY OF THE CLUB

The Comedy Club 4 Kids began at the Edinburgh Fringe Festival in 2005 and has been going from strength to strength ever since.
Since first founded by James Campbell and Mel O’Brien, it is now run by Mel O’Brien, Tiernan Douieb and Isabelle Adam.

After the sell-out show in Edinburgh, the show was brought to London’s Menier Chocolate Factory, where we started running workshops for kids followed by a show some of them could perform in, and all of them would want to watch.

After residencies in the Arts Theatre and the Comedy Store, we moved to the Soho Theatre in 2008, which remains our central London home. From this base, which is a lot less sinister than one in a disused volcano, we also tour our shows and workshops around the country, appearing in theatres and at festivals all over the UK and Ireland.

We have also run shows at the Edinburgh Fringe every year, having gigged in the Underbelly, the Bongo Club and the Assembly Roxy!

THE ETHOS OF THE SHOWS

The idea behind the show came from stand-up comedian for kids, James Campbell, who was already doing full length solo shows for family audiences; why not bring them a proper comedy club experience? His gamble paid off, and performers who never usually go near children had them and their parents in stitches. And kids, who might have otherwise only seen twee shows which focused on the alphabet and how to count, found themselves watching proper stand-up comedians doing proper stand-up comedy, just for them.

We love that adults get to watch our shows with their kids, sharing the experience, helping them out with words/ideas they might be stuck on (both kids helping adults and the other way round), all enjoying the same event…but perhaps being tickled by different things. Spending time giggling is excellent fun, with all the added side benefits of doing it together with your friends and family, and learning how others see the world.

We hope that we spark a love for comedy that will continue as all parties get older; once kids are of secondary school age they may well want to graduate up to seeing comics’ full-length tour shows, and seeking out more live recordings online. (Milton Jones & Bill Bailey both work clean, and are very funny.)

The idea with the show is that it is suitable for all ages, from children aged 6+ up to grand-parents, with comics finding universally funny things to cover, and making sure no-one feels talked down to or alienated. Like a panto, there will be some jokes aimed at the younger members of the audience, some that fly right over their heads, and some that require quite a bit of audience participation. And sometimes Ed Petrie will be on, the only one of our roster who does both pantomimes and our gigs, though we let him away with not wearing tights, hanging out with a cow, etc.

We say 6+ as that seems to be the age where wordplay starts to make sense, and watching things quietly in a group, in the dark, becomes a realistic possibility too.

Kids younger than 6 are allowed in to watch the show, but they may not understand all of it; the comics will be pitching their material – in terms of frames of reference, words used, etc. – at kids of 6+. If you reckon your kids can sit still[ish] for an hour, concentrate and understand what’s going on, then huzzah, this is for them.

Babies won’t get a whole lot out of it. Obviously. But their older siblings will.

Teenagers will, begrudgingly, realise they are enjoying themselves, even if this is “4 kids”, and they are definitely not kids. There is no maximum age for attendees; again, it’s what you think will suit those you are buying for.

Our favourite feedback is from people delighted to have found something that all members of their group could enjoy, parents and carers, grandparents, small siblings and older ones too.

Different venues have different policies on group discounts, but we do often have a cheap deal on buying Family tickets for four people. It can be worth checking direct with the venue, as they may offer free tickets or money off for a set number purchased.

If you are bringing a birthday party, please ensure there is at least one adult for every three children in the group, to sit with them, and help keep them from derailing the show if they are feeling particularly giddy.  (Grown-ups can explain baffling references and theatre protocol, but also why you shouldn’t just be throwing vegetables at the comic onstage, to bring a very specific example to mind.)

Comics often do check if there are birthdays in the room, so your child will get some time & attention (if they want it).  Maybe even a group serenade!

HOW THE GIGS WORK

The Comedy Club 4 Kids is run like any other adult comedy club. We have an MC, an opening act and a headline act; different performers each time, at all the different shows. Sometimes – particularly in London and Edinburgh – we also have 5 minute guest spots from the children from our Comedy Academy 4 Kids.

We programme a real variety of acts, so as the line-ups don’t get too samey, and if one type of comedy doesn’t suit a particular audient then they might like the next act on. A typical bill will be a chatty compere, an act doing stand-up written for an all-ages audience, and then someone doing something other than standing still talking, like sketches or songs or a gameshow. The comics are all striving to entertain an all-ages crowd without patronising or boring them, the closest you can get to spinning plates without having literal crockery onstage.

Comedy website Chortle put us at #1 in their 2013 Edinburgh Festival comedy show recommendations for kids, saying:

This is probably the daddy of them all. The kids’ show that almost a decade ago challenged the big and brash primary-colour clowning of most kids’ shows to present proper circuit comics, but without the rude bits. And it turns out a lot of the acts took to it like a duck to water, revelling in the constraints and the unpredictability of heckles like: ‘Why is that your face?’.

The show is usually one hour long, but can be extended or shortened if necessary.

As we say above, we recommend the show to kids 6 and older but we have had younger children in the audience before who have thoroughly enjoyed it. If you can sit still – or still-ish – for an hour, face forwards, and not be freaked out when all the lights go off, you’ll be fine.

The show is very simple to run, all we need is a microphone with stand, some preshow music, and stage lighting.
It works best in a raked theatre, or theatre/tent/hall with a high stage as the kids need to be able to see, if big old adults are in front of them.
Please do get in touch with us if you would like to know more.
Or have a look at our Shows page to see where we’ll be next.