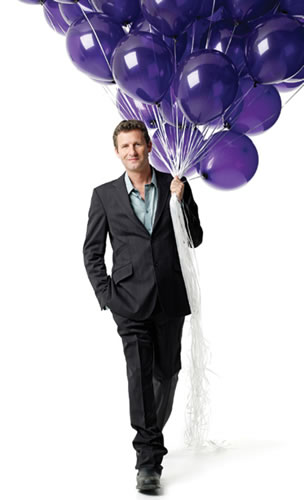 DOING IT FOR THE KIDS

Brendon Burns loves it, Adam Hills is doing it and there’s a dedicated show at the Fringe.
Stand-up comedy for children is now serious stuff. It might even be more exciting than its grown-up counterpart, finds Tom Hackett

The scene: the Bongo Club, Edinburgh, Monday 10 January, 2009. A small, blonde child in the front row stands on his mother’s knee, facing the crowd. He has attached to his wrist an oddly-shaped balloon animal, which he has referred to earlier as a ‘vampire bee.’ In a deep, booming Russian accent that reverberates around the room, he addresses us. ‘I am smiling at you, but I want you dead.’

This disturbing vision is not taken from a piece of avant garde horror theatre, but from Comedy Club 4 Kids, a different kind of experiment that’s now been running at the Fringe and elsewhere for over four years. The club invites experienced comedians from the normal, adult circuit to step out of their comfort zone and perform stand-up for an audience of children, ranging in ages from about five to thirteen, and their parents.

The booming Russian voice in fact belongs to Australian comedian Adam Hills, who is crouched onstage behind the five-year-old boy and attempting to convey his thoughts to the room. ‘At least I think that’s it,’ says Hills, contorting his body to face the child. ‘What are you really thinking?’ The child starts squeezing his balloon animal and shouting in an angry, staccato voice: ‘I’ll get you, I’ll kill you, I’ll punch your ears and punch your nose!’

‘Gosh, that’s even more disturbing than what I said,’ laughs Hill.

The Comedy Club’s founder, comedian James Campbell, would be unsurprised by such a weird response from a child to a comedian’s question. ‘In some ways you have one of the best comedy audiences you’ll ever have at our club,’ he tells me. ‘They’re sober, they want to be there, and they have the enthusiasm of being children.’ But you have to expect the unexpected. ‘In an adult gig, if you ask the audience an open question, you kind of know what the answer’s going to be,’ he admits, ‘because that’s what comedians do. It’s a little bit like Derren Brown, but on a less sophisticated level. And then we riff on it and it looks like we’re improvising, that’s one of the tricks. But you do that with children, and you’ve got absolutely no idea what’s coming back.’

Campbell’s second-in-command at the club, the comedian Tiernan Douieb, has gathered plenty of examples. ‘I live in a leek; I’ve seen a burnt baked bean; my teacher’s scared of bananas: you’ve got to be prepared for anything,’ he laughs. ‘We got Matt Kirshen to do a gig once and one of the children shouted out: ‘Why is that your face?!’ What on Earth was he meant to do with that?’

Whilst children’s uninhibited, stream-of-consciousness heckling can produce some lovely and very funny moments, it can also be genuinely scary. Douieb once compered a gig in which a ‘little Che Guevara’ in the front row started throwing random words back at the acts, affixing the word “revolution” to the end of each one: ‘Dog revolution! Mobile phone revolution! Ginger revolution! Monkey revolution! Banana revolution!’ The other kids started joining in until the acts couldn’t hear themselves speak. ‘It really was like a children’s revolt,’ says Douieb, his eyes widening as he recalls it. On another occasion when a few too many sweets had been passed round, ‘one kid looked me in the eye and said, ‘I’m scared of the dinosaur of your life and my life.’ It was terrifying.”

If unpredictability is one of the key challenges in performing stand-up for kids, this challenge can sometimes be turned on its head. Brendon Burns is well-known on the adult circuit for his brutal, excoriating, PC-skirting shtick, so it will surprise some people to know that he’s regularly performed for children and gone down an absolute storm. Burns says that his rambunctious persona is the same when he performs for kids (‘I just have a bigger smile while I’m yelling!’) and so too is his fervent desire to slightly alter the way his audience sees the world.

‘What I try to do is dispel the age barrier and let kids do things with their parents that they’re not allowed to do normally,’ he tells me. ‘So I normally start off the gig by saying ‘This is something you haven’t worked out yet, but your parents are just people.’ Then I ask a kid in the front row, ‘What’s your dad’s first name?’ And he might say ‘Brian.’ And then I say: ‘Okay, just this once, you’re allowed to call your dad Brian.’ Then I’ll get him to turn to his dad, and on the count of three, shout ‘Shut up Brian, what do you know?!” He chuckles. ‘And the kid will get a big kick out of that.”

Burns then pushes things even further. He gets every child in the audience to turn to their parents and repeat after him, slowly and pointedly: ‘Look into my eyes. You think you’re in charge? You think you’re running things? Stare deep into my face and listen to what I am saying: I am the reason your dreams will never happen.’ It’s a dark, subversive joke, at which ‘the parents howl’ with laughter, says Burns. ‘And you know what? The kids get it. It’s a beautiful, bonding moment between parent and child as the child stares into their parent’s face and tells them a solid home truth, that they know to be true.”

In fact, Campbell’s impetus to start the project came partly from a desire to expose kids to the unconstrained environment of a comedy club, where taboos can be broken. He was inspired in this by Adam Hills, who in an adult show several years ago talked about trying to get into Disneyland and have his photograph taken with Mickey Mouse, a privilege allegedly not granted disabled people (Hills has only one leg). ‘Apparently it blows the myth that Disney can make all your dreams come true,’ says Campbell. ‘Now that’s hideous and slightly scary, and I was thinking: children should be aware of this.”

But when I talk to Hills shortly before his second ever Comedy Club 4 Kids gig, he’s less concerned with challenging his audience than in being challenged by them. ‘Adults will laugh out of politeness,’ he says, ‘but if kids don’t get something, they won’t laugh. So it’s possibly the most brutal audience you can find – kids are all like Geordies in that respect!’ He’s also worried that some of the stuff he plans to say about encroaching fatherhood could fall apart when scrutinised by children. ‘It’s perfectly possible that what I thought was a poignant moment in an adult show is actually massively patronising when you try to deliver it to a whole bunch of kids.”

In the event, though, Hills has little time for any of his prepared material. He rides the wave of random interjections from this most unpredictable of audiences, clearly having an absolute ball. The five-year-old child, he’s decided, is threatening to take over the world with his vampire bee, and must be stopped. This being a roomful of children, many of them have smuggled in toy animals of various species, and the gig becomes a massive build-up to a ‘crazy animal fight’ between the bee and a host of unpromisingly fey creatures, from Lady the bunny rabbit to Snowball the cat. It is genuinely hilarious stuff, practically flooring everyone in the room with helpless laughter. ‘I’ve got to go and entertain some adults now,’ says Hills with genuine regret as he leaves the stage to get to his next show. ‘It’s not half as much fun.’