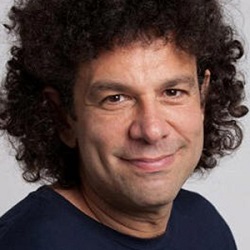 Al Lubel became a lawyer to satisfy his mother and quit to become a comedian to satisfy his sadistic need to torture her. After graduating law school in Florida, Al moved to California, passed the bar exam on his first try and immediately began the practice of standup comedy.

Al gradually improved at comedy, getting work on the road and leaving the law behind. Within a year he won the $100,000 Comedy Grand Prize on Star Search. Doing the Tonight Show was a big childhood fantasy, so Al auditioned and became one of the last comics to appear with Johnny Carson. Al went on to do six more Tonight Show appearances with Jay Leno and made five appearances on the Late Show with David Letterman.

Al has also played an attorney on the Blake Clark HBO Comedy Hour and has been featured in the Showtime and PBS special, A Standup Life. He has appeared on all seven episodes of the ESPN series, Bill Walton’s Long Strange Trip.

But Al does admit to missing the practice of law. As he says, “I’d like to have just one more trial, something serious like a murder trial, because right before I give my closing argument and my client’s entire fate hinges on each and every word I say, I want to see his face when I turn to him and whisper, I’m a comedian!”