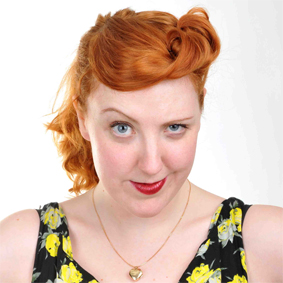 Award winning writer, actor and stand up comedian, Katie Mulgrew has been heard on BBC Radio 4, BBC Radio 2 and seen on CBBC and ITV2.

Her play, ‘Omnibus’ was shortlisted for the Tobacco Theatre prize in 2014 and won the inaugural “Liverpool Hope Playwriting Prize in 2015. It was co-produced by the Liverpool Royal Court and Liverpool Unity Theatre in July 2017 (Very funny **** – The Stage). She has written for BBC Radio 4’s Newsquiz and CBBC’s Class Dismissed. Katie co-presented and was a contributing writer on the ITV2 broadcast pilot, Lovefix and script edited for international award wining short film ‘Ctrl Z’.

Katie won the Kudos North writers award in 2017, a joint award between  BBC Writersroom and Kudos North and is currently developing a comedy drama with Kudos North Productions. Katie is a member of BEAM, a developing writers programme from Mercury Musical. She is also a book writer for new musical Comedy ‘Southbound’ which went into workshop January 2019 at The Other Palace Theatre on the West End.

Nice things people said about Katie and her Edinburgh shows

“…An absloute natural stand up, unpretentious and hugely likeable, and a great writer…A naturally gifted comic who can go all the way…”

“…It turns out that intellectual comedy doesn’t have to be belligerent or dry.”

“a pretty great hour of comedy.”

“…Smart and witty…she has an easy rapport with the audience that many more experienced comedian would sell their joke books for.”

“…Comedy courses through her veins…”

“…Among the best on the Fringe…”

“Mulgrew is an engaging, likeable presence who doesn’t struggle to hold the audience’s attention. This is a well-structured thoughtful show..radiating warmth”