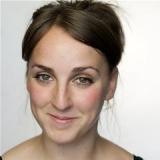 Lucy Pearman is a British comedian and actor, who started out as half of the sketch comedy double-act LetLuce. Her solo shows involve music, clowning, character comedy, surrealism, audience interaction, props and puns. Sometimes she’s dressed as a massive egg. Sometimes she’s in a suitcase. A large bunch of grapes is not unusual. It’s just her way.

“Quite rightly becoming a household name and a safe ‘go-to’ in the world of absurdist comedy.” – **** Edfest